After a stormy night at the campground near Mokau the next stop was Tongaporutu where the beach is a stunning sight at low tide. 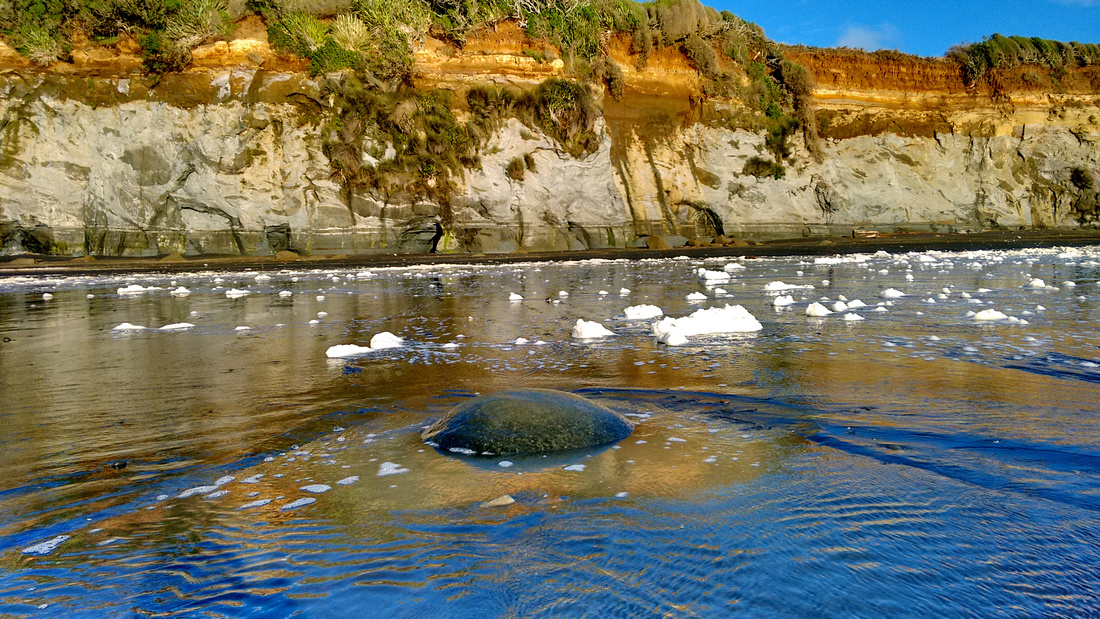 But don't leave after you saw that! Bring some patience and wait for the high tide and you can see the waves crushing against the cliffs. Very impressive: 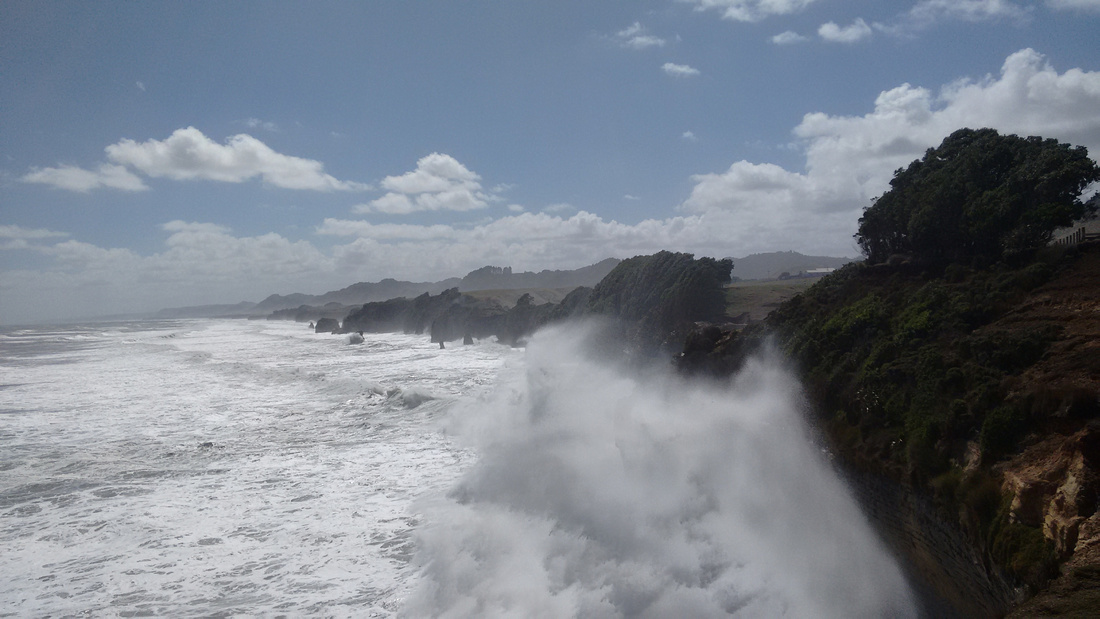 Going further down the coast is the so called Whitecliffs Walkway. Beware the tide they say. It is save 2 hours either side of low tide they say... 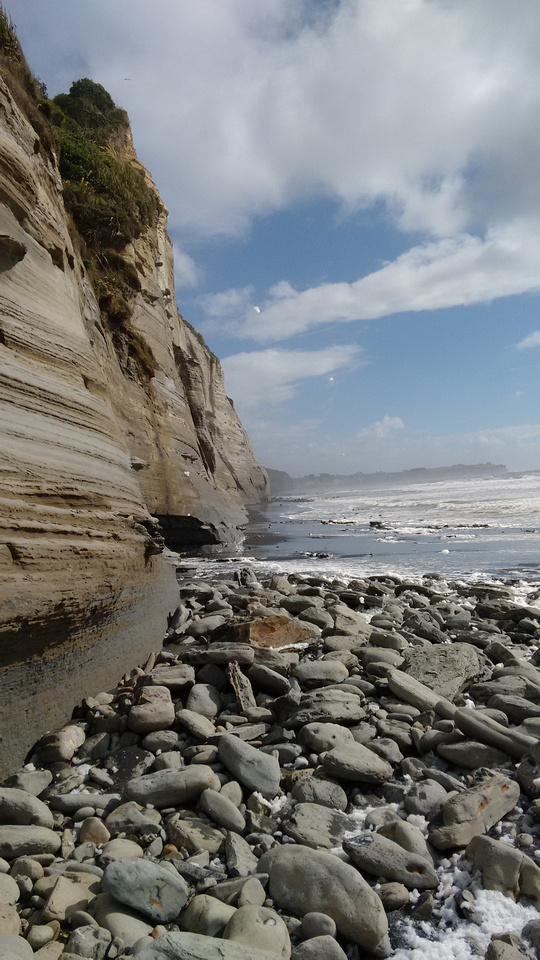 ...don't believe it. You might end up with soaked shoes. After I took the following picture and picked up my shoes again an even bigger wave came which would have washed away my shoes from the boulder. 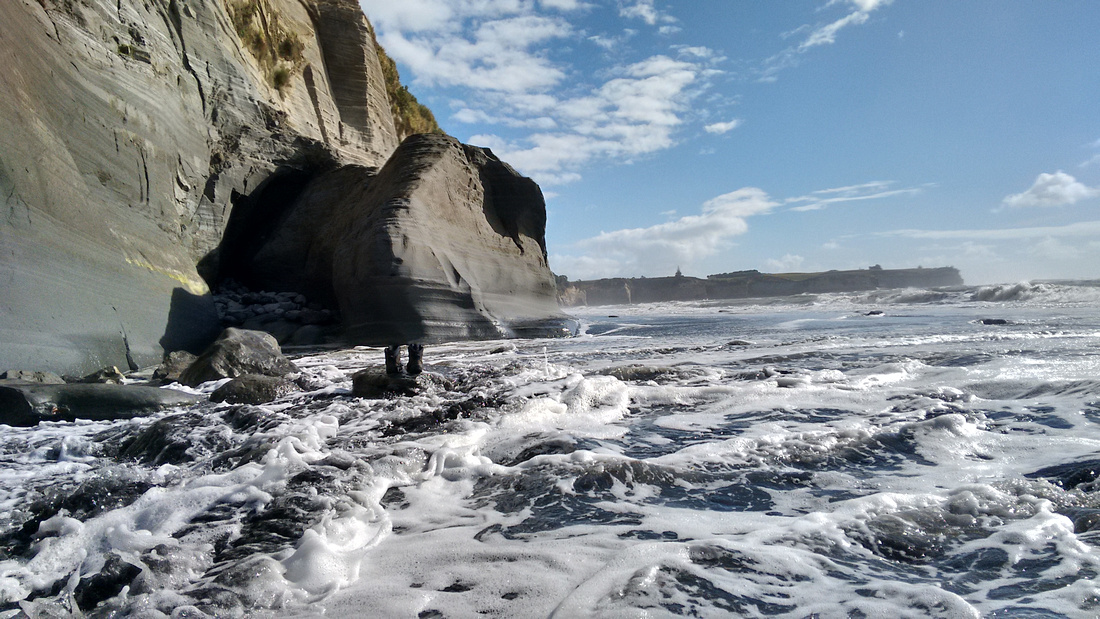 The biggest attraction in the Taranaki region is Mt. Taranaki. Usually he hides behind clouds, so you need to bring patience if you want to see him in his full majesty.

In the past many magnificent mountain gods lived near the heart of the North Island: Ruapehu, Tongariro, Ngāruahoe, Taranaki, Tauhara... and the only female - little Pihanga. Taranaki dared to make advances to Pihanga and was reproached by Tongariro and a mighty battle ensued between them. Tongariro was the stronger of the two mountains. He defeated Taranaki, whose peak shuddered and sides convulsed. In his flight he carved the Wanganui River, forming the Ngāere swamp when he stopped to rest. The he turned north and settled besides Pouākai, a beautiful range. When Taranaki conceals himself with rainclouds, he is said to be crying for his lost love. 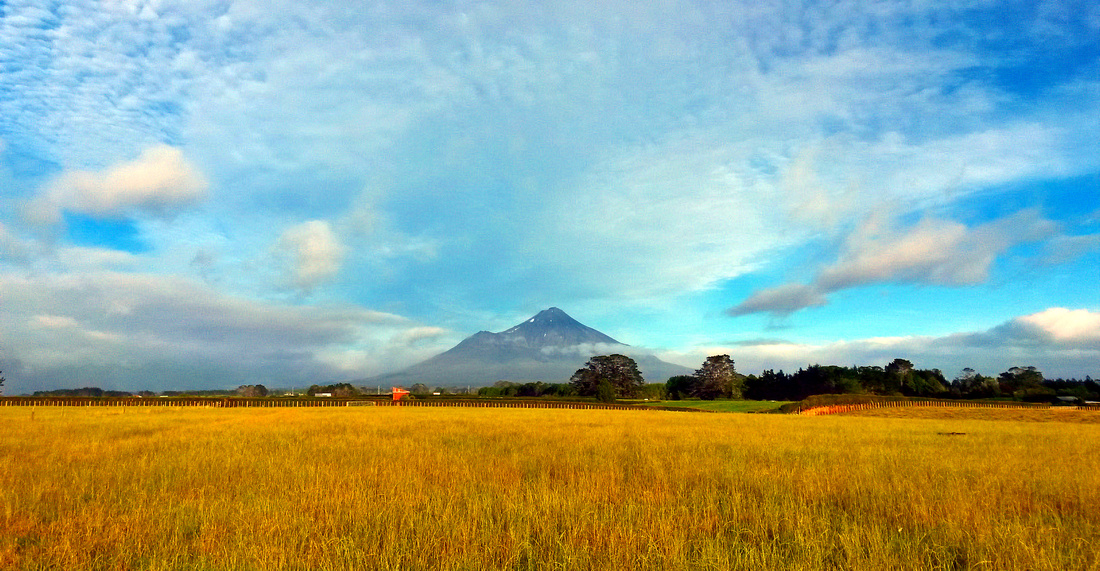 Near Stratford is the York Road Loop Track, which follows part of the old Egmont Branch Railway Line. The railway evolved in 1901 when the local Road Board and Council lobbied the Minister of Railways to construct a branch railway for metal quarrying on the mountain. Until the late 1920s, the quarry provided metal for Taranaki roads and rocks for Port Taranaki in New Plymouth. World War II created a major setback for the quarry and it was finally closed during the late 1940s. Typically for New Zealand they removed almost all traces of the railway, just a few remnants where left for this historic walk way. 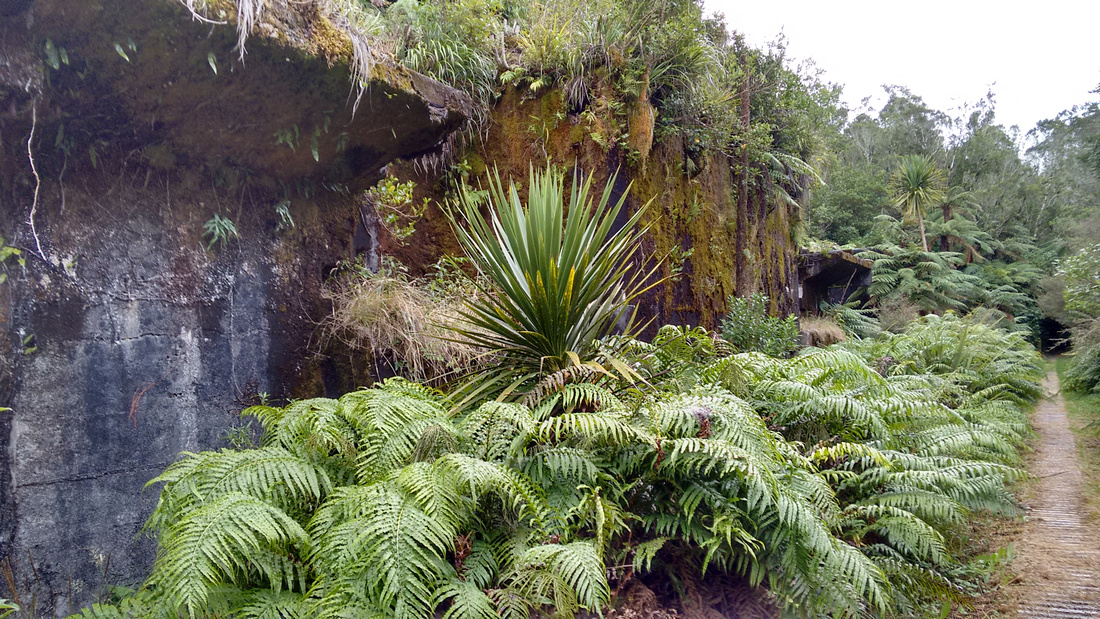 On Mt. Taranaki himself there is - no surprise - a waterfall. Dawson Falls: 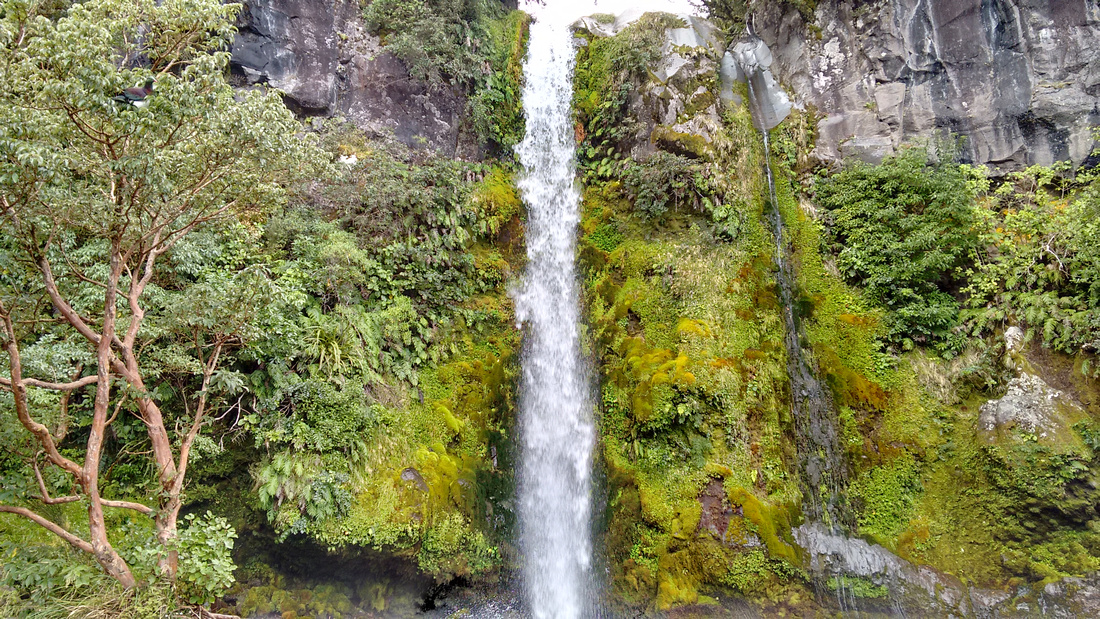 The forest around Dawson Falls is also called Goblin Forest for a reason: 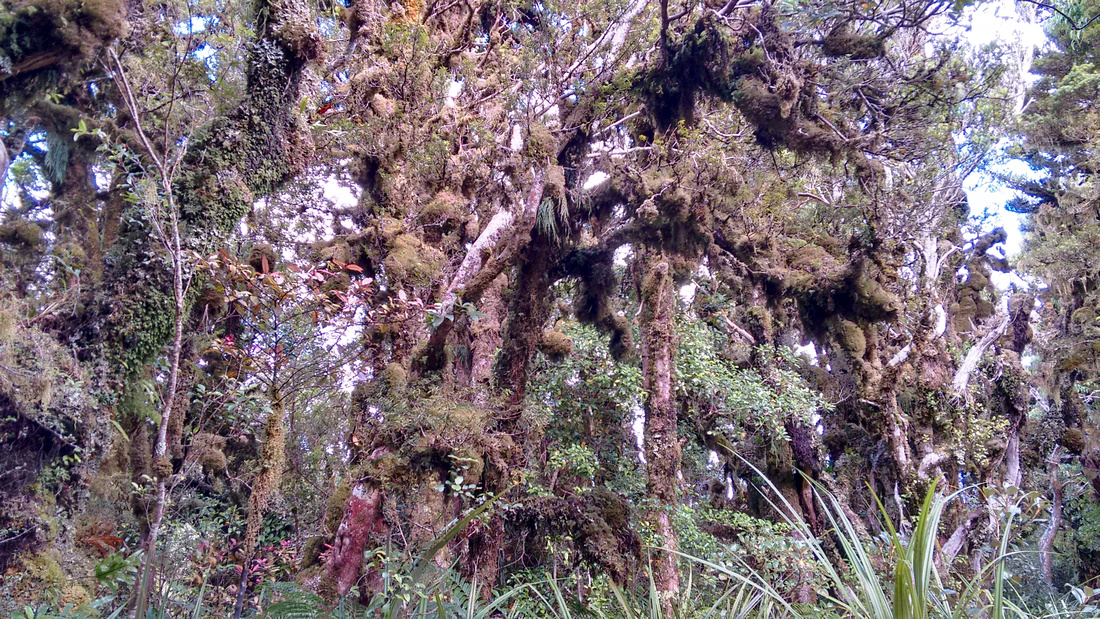 And if you walk for some time through the Goblin Forest you come to Wilkies Pools, a series of natural plunge pools formed by the scouring action of water-borne sand and gravel: 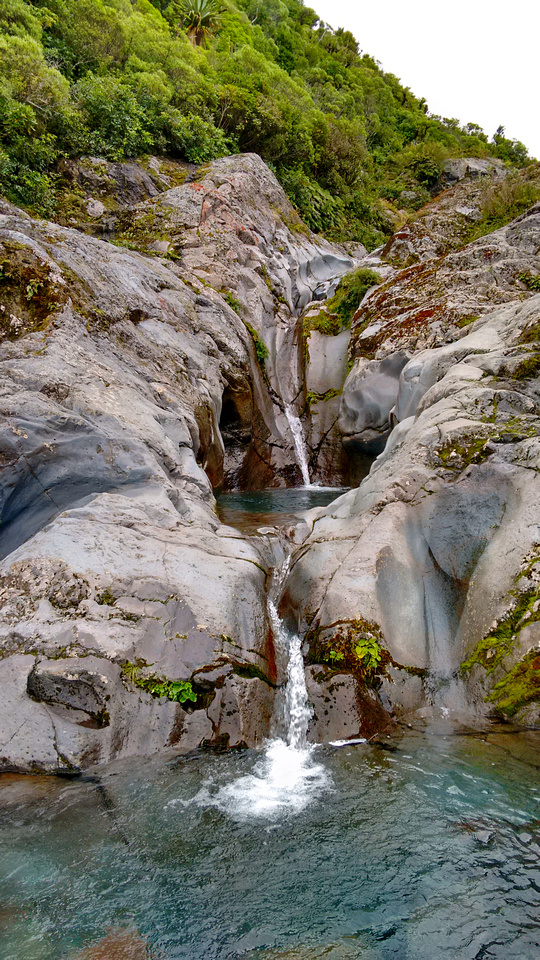